Feral goats on an unspoilt isle

Oliver Power recalls a glorious stalk off Scotland’s west coast, where a goat population in need of management presented a sporting challenge 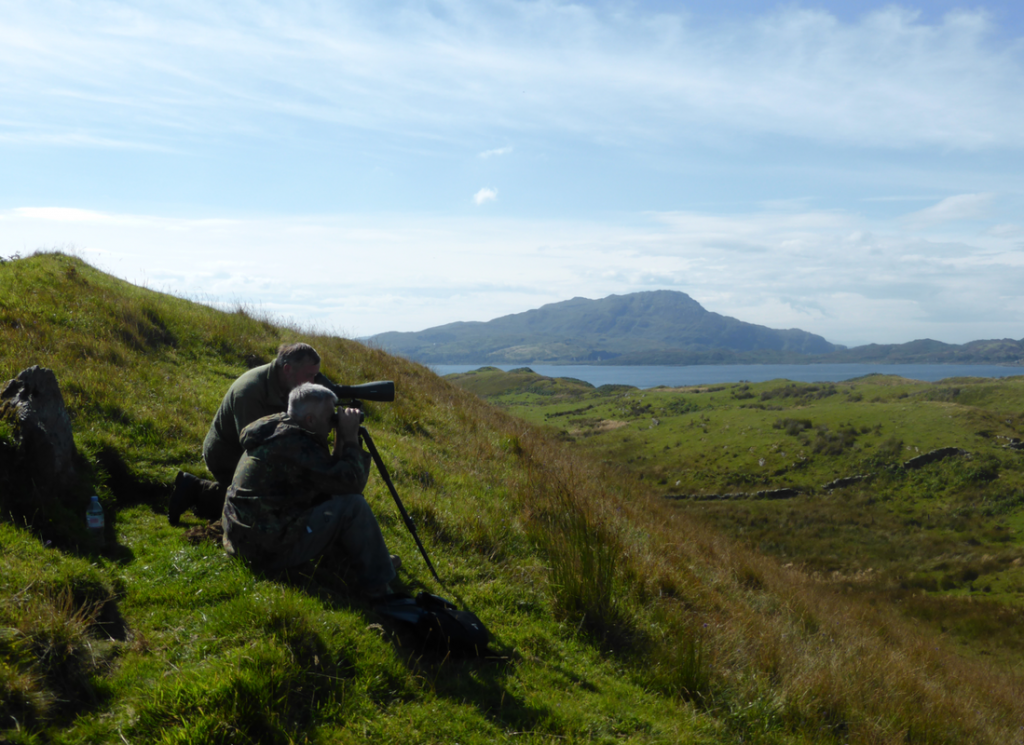 Rain! Rain! And more filthy squalls! I shouldn’t complain too bitterly as I watch the misery of benignly named storms trying to sink our Northern countrymen on the News. But as the rain splashes with renewed vigour off the window panes for the fourth time that day. I receive a phone call from an old friend who has a desperate hankering to catch the twilight season of the hinds on the west coast of Scotland. I have also been craving to get North and stalk! But with the updates coming out of our usual glen, it wasn’t encouraging. Either red numbers were depressed by the hard climatic conditions or face a week in a lodge starring out the window seeing how the rain can descend down at different angles!

As my pal discusses his need for hinds, I ask about the goat situation. ‘What is it about you and goats?’ he scoffs! ‘Well’ I said ‘There are people who like a mixed bag when they wing shoot. I like a mixed bag when I go stalking! Also, I like the difficulty of hunting quarry which live in hard to reach places!’ We concluded our conversation by mutually agreeing we would monitor the weather and see which estates could offer the best sporting opportunities. 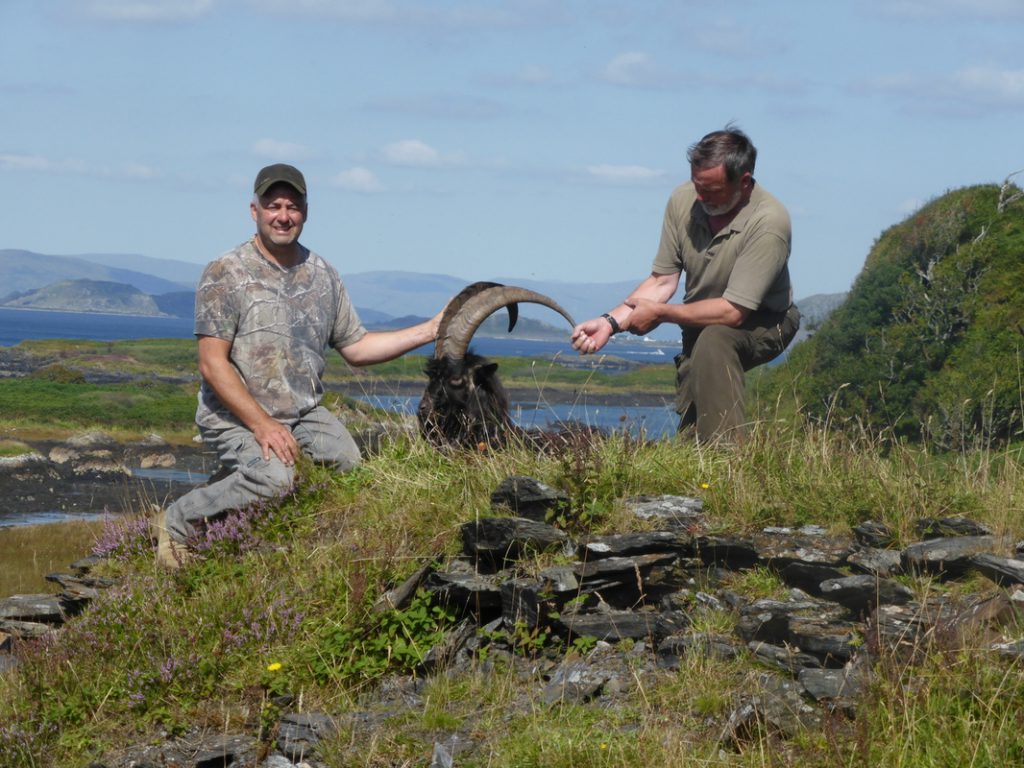 A sliver of sun had started to pierce and radiate off the bark of our trees. Like Wells’ time traveller, I am turned back to August 2014 when the west coast shone like the Caribbean and it was our first venture to stalk Capra hircus – feral goats! A fellow comrade in arms and I had been given a very good tip of some excellent Capra stalking just south of Oban. So, we packed our kit and drove North. We took an unhurried drive up to Scotland, overnighting in Carlisle. Our gillie had requested that we phoned him once we reached the busy port of Oban, to confirm our ETA, which we duly did. From Oban we traversed south west to Ellenabeich, Isle of Seil. Over the last hill, we turned down sharply and set out in front of us is the Prussian blue sea, lying calm, and the gentle heat haze blurring the grass fields. I spy our gillie’s house nestled in a farming complex.

Our gillie and his wife soundly welcomed us to their home, where my friend and I were to rest for the next few days. After a well-cooked supper, we were given a debriefing about our routine for the forth coming hunts. From our side, I put forward that I wished for a good representative billy and my friends’ needs were to cull some goats and to enjoy some long range target shooting. All requests could be satisfied by our guide.

Day one starts with us zeroing our rifles. Our gillie eyes us cautiously on how we handle our rifles and prepare to shoot down the orange clay targets, placed at 100 – 300 metres. Marksmanship proven, we boarded our guide’s 4×4 and headed for the Cuan car ferry. After a five minute crossing it landed us on the Isle of Luing. Driving to the hunting ground we are given a brief history about the goat population on the Isle. Not naturally indigenous, the goats are of cashmere descent and were initially used for the garment industry. But as time went by some of the goats broke free and set up their own ‘feral community’!

We parked up, dismounted and formed an observation post over the Sound of Luing, which also took in Eliean Dubh Mor, Isle of Lunga and the Isle of Scraba. The sun beat down on our tiny group, with just a breath of wind to keep the midges at bay. We eagerly surveyed the high scrub cliffs of Luing’s western coast line. After two hours and a good packed lunch, we relocated to another headland. Just as we were moving into our new ‘o.p.;’ my friend nudges our gillie and points out a pair of scimitared shaped horns, nodding in and out of the thicket.

The black billy stands within seven other capris. It’s time for us to manoeuvre and look for a suitable firing position. To the right of the billy we flanked him. Where we find a small promontory, which is an ideal prone firing site. The range finder measures 238 metres. I run the data and place the correct mildot on the heart of the beast. The rifle goes off! The billy stands – no reaction! Reload and fire! The billy takes a leap down the cliff and is quickly hidden by the deep flora below.

Huffing, puffing, sweating and slipping down the loose slate slabs. The gillie leads us down to the shoreline and along to where the billy might lie! Our guide clambers up the deadly, unstable crag and inches along a toe width ledge. He shouts down to us and confirms that the Capra is down! Safely on level ground we inspect the beast and find the two entry wounds in its ‘engine room’. Animals that inhabit these rock faces have an incredible resilience. The shot reactions on these types of quarry are always hard to read. It either falls down dead or shows no reaction and runs away. (As I have experienced whilst hunting Ibex in Central Asia.) Ergo, I did not need to start to question the effectiveness of my ammunition!

The weather on day two is warm and glorious. This time it is my old pal to lead the stalk. We return to the Isle of Luing, where we meet with the landowner’s son, who with some of his companions takes us on a boat ride to their uninhabited Isle – Scraba.

The Isle of Scraba’s goat population has become a little thick of late and needs to be trimmed down. Circling the isle we glass for the herds of capris; binoculars bobbing up and down with every wave on our floating observation platform. As the craft glides around to a sheltered bay, tucked into a narrow corridor of the valley resides a flock of 40 plus feral goats. Our guide quickly plans the amphibious stalk with my friend. They are inserted into a low area of seaweed covered rocks. Our vessel pushes off and we watch the hunt act out in front of us.

Crawling in and out of the shoreline boulders the gillie and my friend stealthily make their way into about 250 metres to where the goats are feeding. A moment’s pause and then two nannies are quickly dispatched. The herd starts to react to the two loud noises, and then a young billy is sniped. Now the herd is starting to move at pace. A fourth and final shot sounds out and another young male goat falls! The goats are swiftly gralloched – two carcasses would come with us and the other two would remain for the ravens, golden eagles and sea eagles to feast upon.

Come day three we had finished stalking. But there was one out standing matter from our trip. From the day we planned this trip, my friend strongly insisted that this hunt must include long range target shooting. So our gillie fully opened up his rifle range, which extended to roughly 400 metres. Orange clays burst left, right and centre with great delight to my comrade. Of course matters where spiced up with a wager! Who would be the quickest to shoot down the last remaining clays at 346 metres? Again my straight pull rifle speedily out preforms the Mauser actioned rifle, by three clays to one!

As I remerge from my remises I pray that these heavy winter storms will crumble and give grace to the west coast. In order for us to swiftly return to those sun soaked sceptred isles to once again chase the Scottish ‘Lords of the Pinnacles’.