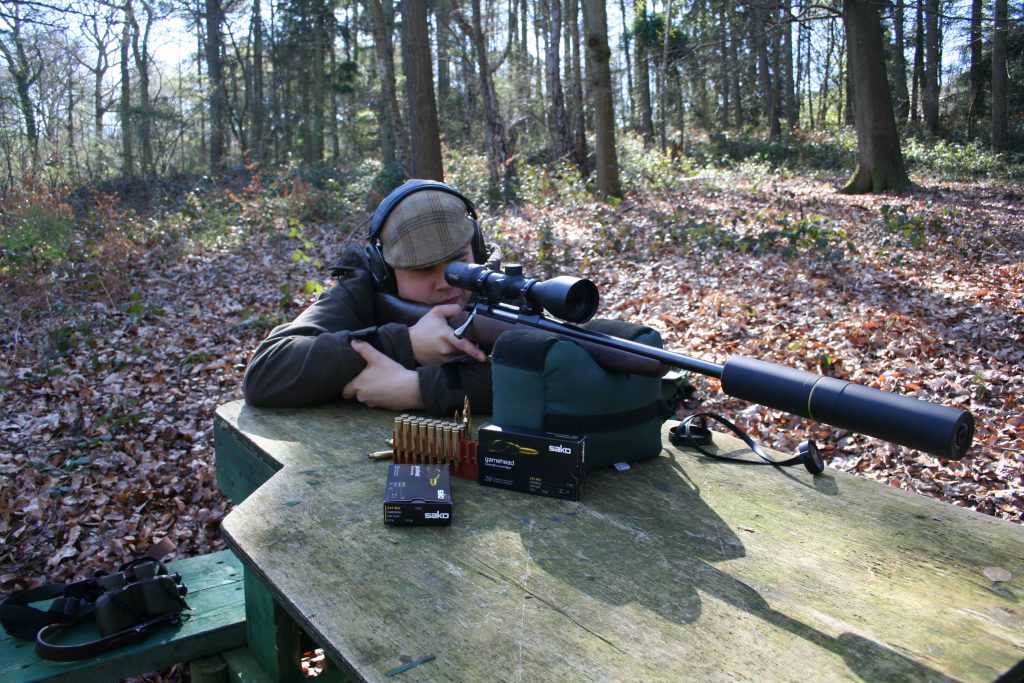 What do the names Tikka, Steiner, Stalon & Sako have in common? Answer: GMK! These brands are under the distribution umbrella of GMK. In partnership with Beretta, they believe that they have brought together a unique rifle system for the foxing and deer stalking man or woman.

Luke Davidson of the Beretta Gallery, in London, wants to herald the revamped Tikka T3 rifle, now branded as the T3x – ‘X’ symbolising the three new aspects of the T3x:

But will Luke be able to convince me, a professional hunter of 20 years, on a test fire and a morning’s deer stalking that the T3x is ‘Second to None!’

At the shooting bench Luke removes the new T3x from the rifle slip. Which of the new 19 variants of T3x rifle is to be unveiled? He places on the shooting bag the Hunter T3x. This is a walnut stocked rifle, with a standard, blued barrel. What are the key improvements between the old T3 Hunter & the new one?

I am not given to using a great deal of swooning adjectives and hyperbole to describe the aesthetics of a rifle. But it is a good clean looking rifle for its class, i.e. its financial class. But, when I pick up the rifle and shouldered it, I am astounded by the lightness of the rifle! What is more surprising about the rifle’s lightness is that it is already mounted with a scope, sound moderator, bi-pod and sling! I can be sceptical about light rifles – lightness can equal punishing recoil and not being very accurate! This T3x is chambered for .243win, but there are 19 other calibres to choose from in this particular model.

Before zeroing the rifle, Luke describes to me the scope and moderator that I will be using in conjunction with the Hunter. The scope is a Steiner Ranger: 3-12×56, 30mm Tube, variable illuminated reticule – 6 day & 6 night settings, made in Germany.

The sound moderator is Stalon W145. It’s a two piece field strippable moderator, made in Sweden and fully proofed by the London proof house. The W145 is made from aircraft grade aluminium, weighing in at 450 grams.

Now, it’s time to put the T3x to work and for it to prove that it is ergonomically efficient and its accuracy on the range. This Hunter is a straight out of the box rifle and has not been modified. Therefore the trigger is at its heaviest setting circa 2kg of pull. The Tikka will be fed on Sako’s 90 grain soft point ammunition; as all Tikkas are tested with Sako ammunition at their factory in Finland. So, after a few dry fires to get the feel of the trigger pull I load the three shot magazine with the Sako ammo. The bolt effortlessness and with great fluidity feeds the first round into the chamber. The cross hairs settle on the paper target and the rifle lightly coughs out the round down the range. I pull the bolt back and the extractor claw firmly grips the spent cartridge and powerfully ejects it away from the bench and onto the ground. I repeat the procedure over and over until the magazine was spent. I turn to Luke and said ‘It’s like child’s play this rifle!’ ‘The recoil is really non-existent, due to the new improvements – recoil pad & steel recoil lug; and these enhancements working in conjunction with the Stalon moderator further diminish recoil.’ It’s a rifle you can happily shoot all day, without it having any negative effect on your shoulder.

The Stalon W145 offers incredible sound reduction and will give the other Scandinavian manufacturers a good run for their money. 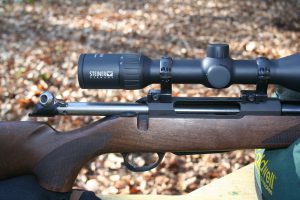 The Steiner Ranger scope gives you a very clear picture and has a discreet illuminated flash dot ie: not giving the user any afterglow on their retina.
After the rifle cooled down, Luke came to the bench and test fired the T3x. As we amble down to the targets to check our groups; Luke informs me that Tikka guarantee 1 MOA of accuracy on all the new range of T3x. We check our groups and the T3x is shooting consistently.

The ‘field trail’ for the Tikka T3x commences on a chilly Monday in West Oxfordshire. I have two quarries in mind for it; either a muntjac doe or a yearling roe buck.

The dawn light is rapidly filling the sky. Parked up on a section of headland, I tell Luke it is time to go. As we dismount from the 4×4 and head towards the car’s boot a silhouette moves on the brow of a wheat field. A muntjac is moving at pace down the field. A quick look with the binoculars tells me that this buck is not for culling due to his antler length. We move off from the vehicle, cross a lane, and enter a ride with large cereal fields on our left and woodland to our right hand side. The sunlight starts to break up the gloom of the mixed woodland and allows us to peer in. 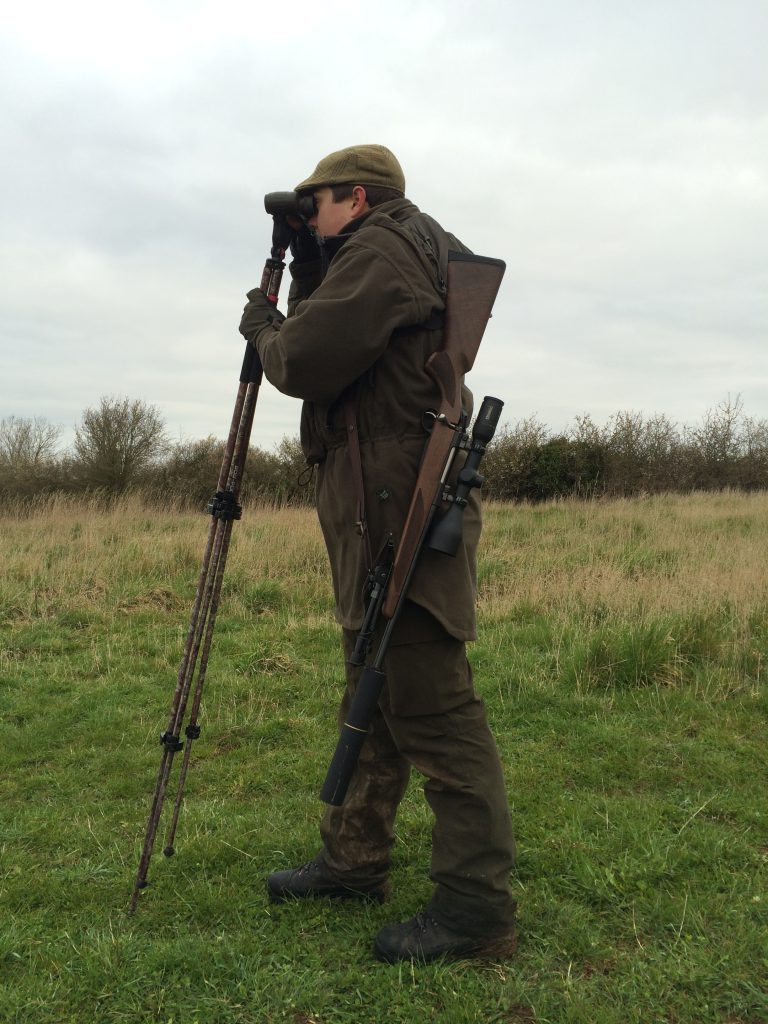 We have caught the early morning rush hour for the cervi. Two minutes in another muntjac’s tail fleets pass in the wood. Luke and I hold our position and see if the small deer stops – it doesn’t! I scan with my bins across the wheat fields, along a cover crop to the left hand side of a wood. Out of the edge of the wood’s shade, a white cordial patch blinks! I move my binos from the white patch and follow the grey/brown form to its neck and head. The head is reaching up and pulling at fresh, tender, hawthorn shoots. The back drop and the way the head is moving it is hard for me to interpret whether or not it’s a roe buck or doe. We stalk in for a closer a look. Luke and I follow the ride down and our bodies are masked by the cover crop and a single line of beech and hazel trees. A careful path is trod by us, as there may be more deer moving in the wood on our right. Again, there is movement, the tell-tale flick of a muntjac’s tail. The barking deer’s shape keeps on getting broken up by the thick cover. I’m not interested in tracking it; I have my sights set on the roe. Upon reaching the bottom section of the ride, we halt and scan out to our left. Of course the roe, which is a doe, has already spotted us! We stand stock-still and wait to see if she has a male companion. Suddenly, movement comes from the left hand side. A greyish rufous outline is moving through the beech trees and it is drawing close to our position. The roe bucks gets within 15 metres and starts to feel uncomfortable; its ‘sixth sense’ can feel that are two strange objects standing on the ride. It has a long last look at us before coming onto the ride. Once on the ride he turns sharply and faces us. The buck cannot work out what we are. So he starts to stamp and scrap the ground and nod his head up and down in exaggerated movements. The roe buck turns away and trots off towards the doe roe and they both return to the safe haven of the hawthorn trees. “That buck was not on the cull list for this year. A couple more years of growth and he’ll make a fine gold medal head.” I said to Luke. We carry on down the ride, now the woodland is on both sides.

A sharp terrier bark brings us to a stop. I quickly bring up the binoculars and see the barking, muntjac doe. She stands in a small hollow, very bright and alert to our presence. Luke and I start the slow movement of getting the T3x up into the shooting rest of the sticks and for me to manoeuvre behind the Rifle. Of course, the doe gets wise to our actions and quickly trots off using the undulated woodland terrain to her advantage. We shift slightly back to give ourselves a better vantage point and see if she emerges from the cover of a sycamore tree. Within a couple of minutes she appears broadside on a raised mound of dog’s mercury with a large beech tree behind her. I tell Luke to shoot! Through the binoculars I see the bullet connect with the doe and there is a detonation of pins as the bullet exits though her. The doe is dead upon contact of the bullet but pure adrenaline has carried her 30 metres into the heavy cover of brambles.

After recovering the doe and Luke enthusiastically carry’s out the gralloch; we have a sitrep on the rifle. We both agreed that the T3x was noiseless to shoulder – i.e.no metallic sounds admitting from the rifle. The safety catch is smooth and soundless to operate. The scope, the rifle and the sound moderator work well as a balanced triumvirate on the shooting sticks. The Steiner scope performs well in the dawn light, giving good light transmission and offering excellent colour clarity. As mentioned, the incredible lightness of this rifle means that it is a pleasure to carry in the Field all day. But most importantly of all, this quadrumvirate – Tikka T3x Hunter, Steiner scope, Stalon moderator and Sako ammunition with clinical accuracy dispatched a muntjac doe with one shot at 110 metres! And that’s all a novice right through to a PH needs to know that the tools of his/her trade will not fail when it’s time to take that shot!